In 2010, SP Technical Research Institute of Sweden started to plan a new floor for their office building. Being a research institute with a strong interest in energy and smart grids, they decided to take the opportunity to look over their own energy consumption habits in the office.
Employees at SP, together with a sister research institute focused on IT and design (Interactive Institute Swedish ICT), wanted to develop prototypes that would offer individual as well as aggregated energy feedback, designed to be attractive, understandable and to fit well with the workplace routines. Within the framework of a project called OfficeWise, a group of staff aimed to create feedback devices that would be easily accepted by the employees. To this end, the project staff decided to involve end users directly in the development of those devices by arranging several co-creation workshops.

Firstly, the OfficeWise project asked some SP employees to participate in a so called culture probe, where they documented an ordinary day at work using mobile cameras, texts, drawings etc. This supplied the project team with an idea of workplace culture, communication and the role of energy, identity and important spaces and meeting points.
Secondly, SP employees were invited to take part in visualization workshops, focusing on which data the participants wanted access to and how it should be presented. During the workshop, the participants were introduced to different scenarios and solutions for visualization of electricity consumption at the workplace. In creative sessions, the end users were asked to give feedback and improve these solutions.

The SuperGraph – an ambient and artistic visualization of the total electricity use in the office building, situated in the lunch room
The second outcome of the process, including both culture probes and visualization workshops, was the concept of an artistic representation of the total electricity use in the office building, the SuperGraph. The frames of such an ambient visualization was set in co-creation between the project team and employees, while a detailed proposal taking the ideas and thoughts from the workshops into account was designed by the project designer and processed within the team and with employees. After manufacturing the metal frame of the final concept, all 80 employees in the building were invited to take part in the construction of the chandelier-shaped SuperGraph. Everyone could choose an avatar to represent themselves and mount it on the metal frame. This event was very much appreciated and aimed at fostering a sense of ownership and engagement among the employees. The SuperGraph was hung in the lunch room and indicates the total instantaneous electricity use at the office by moving vertically as the usage increases or decreases. 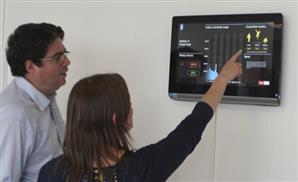 The feedback provided by the SuperGraph is complemented by the ReflectoGraph – a touch screen based feedback on total electricity use. The design of the interface was again set by a design workshop, in which a new group of employees were introduced to a set of questions and scenarios after which they were asked to work on various solutions in small groups by drawing, cutting, pasting and describing their solutions to their fellow participants. The ReflectoGraph is located in the lunchroom and offers the employees more detailed information on their electricity consumption and explanations to why the SuperGraph is rising and falling.